Another, more personal way to look at state spending numbers ...

Yesterday after publishing an earlier piece listing "Four basic Alaska budget facts and a reminder ...," a friend and I engaged in an exchange about how to make the numbers meaningful to Alaskans not as immersed in the numbers as some.  Usually I resist spending much time on those endeavors, largely because I know what I am good at -- and that isn't one of them.  Because I still had the Excel workbook up where I have all of the data, however, I recalculated the numbers as our discussion went along and, at the end, have to admit that the result produced some interesting numbers.

As it went on, the goal was to restate state spending under the various Alaska Governors since 2000 (i.e., the last 15 years), adjusted for inflation (so that the spending levels are not distorted by time) and -- this is the part that my friend convinced me to use to put it on a more understandable level -- stated on a per capita basis, in other words the amount of state spending broken down by each Alaska man, woman and child resident in the state at the time the spending occurred.

The resulting spreadsheet follows, but the quick take away was this:
The final element was to add in on the same basis what the current level of sustainable spending is -- in other words the amount which, if spent today and the remainder of state revenues put aside for the future, could be sustained for decades into the future without the need for increased taxes or diversion of earnings from the Permanent Fund.  The result (based on current population):  $6,585.

I have to admit these are very interesting -- and useful -- numbers. 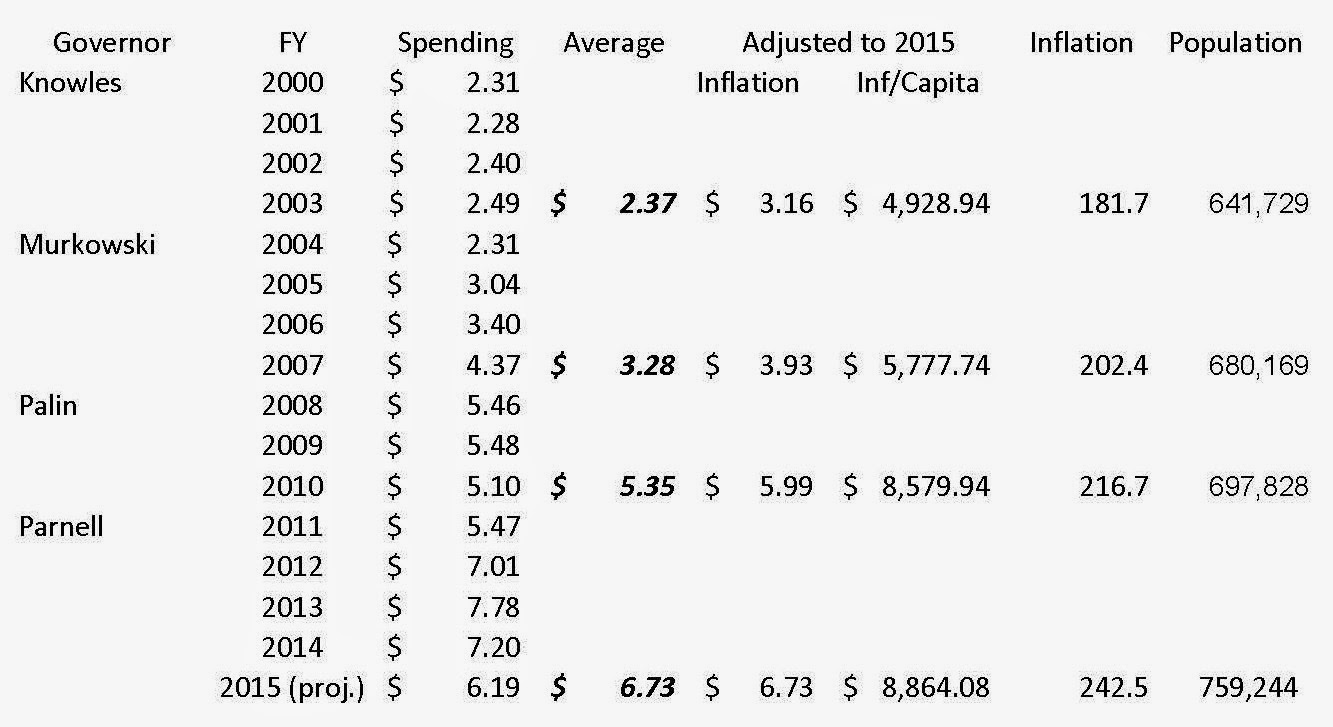 Posted by Brad Keithley at 6:26 AM

... is a supplement to Thoughts on Alaska Oil & Gas, a blog devoted to Alaska oil, gas & fiscal policy issues. Both are published by Brad Keithley, the President of Keithley Consulting, LLC, an Alaska based oil, gas and fiscal policy consultancy.

Recent Commentaries at the main blog

From Thoughts on Alaska Oil & Gas ...